You can’t look away from the fact that French Bulldogs make a great companion for many people. They’re cute, loving, and will always be by your side. 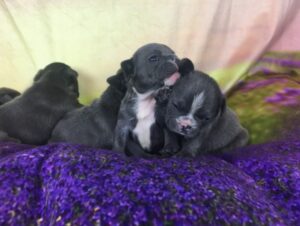 Melissa loves animals. She currently has 15+ years of dog breeding experience as well as raising an English Mastiffs and a French Bulldog. On the Cherry Valley Blue Frenchies’ website, Melissa expressed her love for the French Bulldog breed. Not only does she find the French Bulldog fascinating but specifically, the blue colored ones. Her Frenchie, Phoebe sleeps with her in bed. 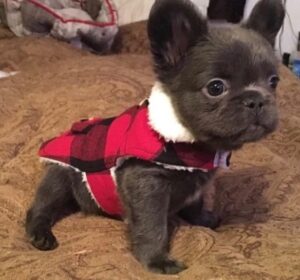 If you’re looking for a blue French Bulldog, then Melissa is your go-to breeder. All of the blue French Bulldog raised are raised inside of her home and they’re flooded with love and care. Melissa also mentioned that her bulldogs love to socialize, so when owners take them home – expect them to quickly become comfortable.

If you go on Melissa’s website, you’ll find available puppies, testimonials, past puppies, photo albums, and other useful information to help you connect with her.

By getting a French Bulldog puppy from Melissa, you can expect:

Let’s go over the testimonials and see what people are saying. 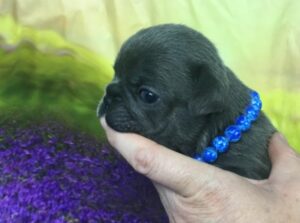 When it comes to the Blue French Bulldog, they’re quite interesting and unique. The color of this bulldog is bluish-gray. If you didn’t know, their colors are actually solid but it’s hard to see due to the white patches on their belly and chest.

If you’re in search of Blue French Bulldogs, contacting Melissa will be one of your best choices. By any chance you’re not interested in French Bulldogs, you can check out the other types of bulldogs that might interest you.

For other French Bulldog breeders in Southern California, this guide might help you: