Admit it – everyone loves Pizza! They’re irresistible, delicious, and you can add any toppings of your choice to them but what happens if your French Bulldog wants a taste of your pizza?

If you’re planning to share your pizza with your bulldog, make sure that you checked all ingredients prior to feeding your beloved companion.

Interesting in learning more about French Bulldogs and pizza? Scroll down a little further for more information on the subject.

If you accidentally fed your French Bulldog pizza, the first thing you should do is triple-check the ingredients to make sure there aren’t any ingredients that could cause any potential harm.

Since French Bulldogs are generally small in size, it’s best to call and meet up with a veterinarian if their illness isn’t going away. 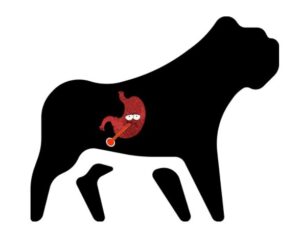 Your French Bulldog will likely have an upset stomach making it less likely to eat and consume normal dog food. 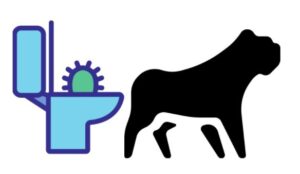 Expect a little mess around your home because your Frenchie will likely be dealing with diarrhea as well. 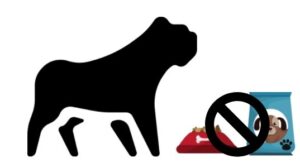 Due to an upset stomach and diarrhea, your French Bulldog will most likely avoid normal dog food.

While it’s highly recommended that you get in contact with a veterinarian due to its small smize, your bulldog should be fine within a few hours. Even though the recovery can take several hours or more, you should definitely keep an eye out and pay attention to your bulldog’s behavior.

One of the most common choices of pizza topping is pepperoni. We’d like to cover this specific part of the topic because we noticed that many French Bulldog owners feed their pet pepperoni pizza.

Here’s what you should know.

Pepperoni pizza isn’t recommended for French Bulldogs because it has a large amount of fat and sodium. It’s unhealthy.  Not only that but pizzas made specifically for humans to enjoy might contain other seasonings that are marked as unsafe for your bulldog.

If your French Bulldog consumes the wrong ingredients, it could be at risk for:

Our team is a fan of dog subreddits for years, so we’d like to share the information and advice we found in these communities.

One Redditor from the subreddit r/dogs posted a thread asking for help due to his dog accidentally consumed half of an entire pizza. 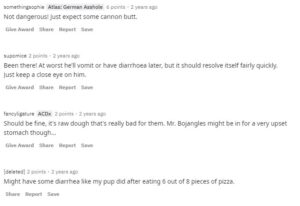 As you can see from the comments, most users posted that the owner’s dog should be fine but expect diarrhea and other potential issues.

If it happens too long though, definitely meet up with a vet for the safety of your dog.

As much as we all love pizzas (even French Bulldogs), don’t feed your bulldog pizza due to ingredients that could harm them. And if you really want to feed your Frenchie pizza, then triple-check the ingredients to prevent issues such as stomach problems and diarrhea.

If your French Bulldog continues to show signs of illness and not recovering, visit a veterinarian immediately.

French Bulldogs are cute, but did you know there are other types of bulldogs that are equally as cute?